This is a special place in Glasgow. With a dedicated and brilliant team to help run it.

I was invited to do a gig at the monthly ‘Live Music at Sharmanka’ series curated by John Cavanagh.

John has his regular weekly radioshow ‘Soundwave’ broadcast on Radio Six International and other stations (since Oct 2010):

The Sharmanka series has also been going for a long time, since ten years. One of the initial main ideas behind it, was/is to allow the invited guests to choose how they would interact with the space and with the beautiful machines.

I chose a sunday vibe – with three basic parts:

1/ acoustic – free improvisation (cello) with the surrounding sonics of the machines.

2/ electroacoustic – maxMSP software patch manipulating live recordings of improvised voice, objects, cello, and field recordings from around the world sent to me via social media or otherwise – a minute of the person’s surroundings. An aural landscape of where you are in the world at that point.

This was inspired by a randam recording that was sent to me from Berlin, of birds at the Tiergarten. I received minutes from a Moscow Metro as well as a Russian musical fountain; Sounds from Bogata, Columbia; frogs from Dordoigne; Bells from Vannes, france; Illinois summer evening; a chicagoan library; Vienna street sounds; peaceful Dutch atmospheres; an old deaf cat chomping; the Hong Kong Metro; soldering sounds from a Manchester jewellery workshop; Thai birds and cicadas; a Scottish folk choir singing; a ferry trip by the Isle of Wight; and Shibuya Crossing in Tokyo. I hope more come my way!

There may be thoughts on furthering these sounds (as a side) by turning them into topical themes for a possible album.

3/ acoustic – cello in the vibe of Roberta Flack’s ‘First Time’ and Alice Coltrane.

I was also able to drop in at an earlier date to see a show to remind myself of the different automata and personalities on display. Robin from the team also allowed me to hear the machines without the audio on top, so i could suss out rhythms and textures. Awesome experience. And they are loud!

One further note: John Cavanagh was directing the machines – and with a basic structure, set out to improvise with my set. Lots of bells and glorious machine noises. 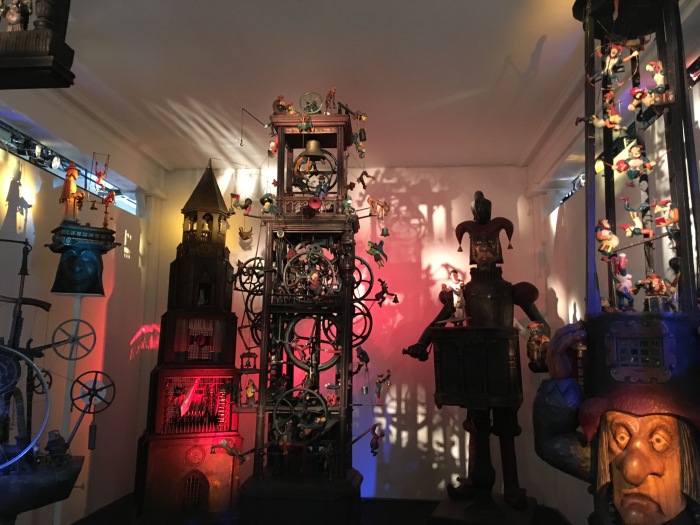